So I decided I wanted to start writing reviews on smart security systems as well. Security is a big deal to me and I think by the year 2030 hits, most homes will have some kind of security system, whether it's a smart alarm or a camera system. Technology is becoming much cheaper and anyone who wants a security system can get one. Even if you just have a couple of cameras to watch your home, they can be had for as little as $20! Even if you just get indoor cameras, you can still call the police if you're alerted that someone is in your home.

With that said, this particular system, the Samsung SmartThings ADT Wireless Home Security Start Kit was something that piqued my interest for several reasons, which I'll get into soon. I found that this smart security system had several "bells and whistles" that I was looking for and at a price tag of $99 from Amazon on sale, it was the right price too. I was able to find out more about the product after I bought it which allowed me to customize it a little more to my liking, such as changing the amount of time you had when exiting and being able to restart the hub when needed. Since the hub has a battery AND a power cable, it's pretty well-armed against intruders. I'm sure if someone walked into your house and the first thing they saw was this hub (since it would be beeping), they would surely attempt to just unplug it. To their dismay, the unit would continue to alarm and would hopefully cause said intruders to leave. But, we're getting a little too deep into the review without pointing out some of my main talking points. Here's what I like and what I don't like so much about the product.

Very cool: Acts as a ZigBee/Z-Wave hub. If wanted, you can optionally sign-up for ADT security monitoring in case of emergency. Works perfectly without ADT subscription. Can use ANY ZigBee/Z-Wave sensors (albeit at a price, see below).
Not cool: VERY tricky to reset (requires kind of a "backdoor"). Sound can sometimes cut in and out unexpectedly. If you sign up for ADT monitoring, you MUST use their sensors (the ones included) — you can still use other sensors, but they won't send out police/fire if a non-ADT sensor is tripped.
Overall: For $100, it's a great deal. I've had mine for several months now and I never leave home without setting the alarm. If people are aware that you have an alarm, sometimes that's a deterrent enough to leave your home alone.

I was a little unsure about this product when I first ordered it, but after getting it setup, I was amazed! I bought several extra ADT door/window sensors and I had no trouble pairing any of them (or anything included with the kit) to my hub. Hub was super easy to get online and get working. In no time I was able to set my alarm, get every sensor placed and get everything armed without a problem. The door/window sensors come with small strips of adhesive if you don't want to damage your door or window frames, but they also include screws if you'd like to permanently mount your sensors. Due to my door and window frame design, most of mine were mounted with the screws, but they work just fine. I did end up smashing one in my garage door due to bad placement, but besides that, these sensors are sturdy. They are basic magnets, but they get the job done and haven't thrown ANY false positives.

These hubs have ZigBee and Z-Wave built right into them, so if you've been thinking of buying a hub JUST to use some other device, then hang tight! A lot of ZigBee/Z-Wave hubs can be upwards of $35, depending on what version you get and if it's on sale or not. Keep in mind, if you take that route, then it's only a hub for $35. With this, you get a security panel as well. It's a fantastic idea to build the ZigBee and Z-Wave hubs INTO other products, such as this one, as it makes the end product more valuable! All my sensors are connected right to this hub and I can see the status of any of them inside my Samsung StartThings app or the original SmartThings app. It's a win-win situation as you can add more sensors or other products, such as ZigBee or Z-Wave smart light bulbs in the future. 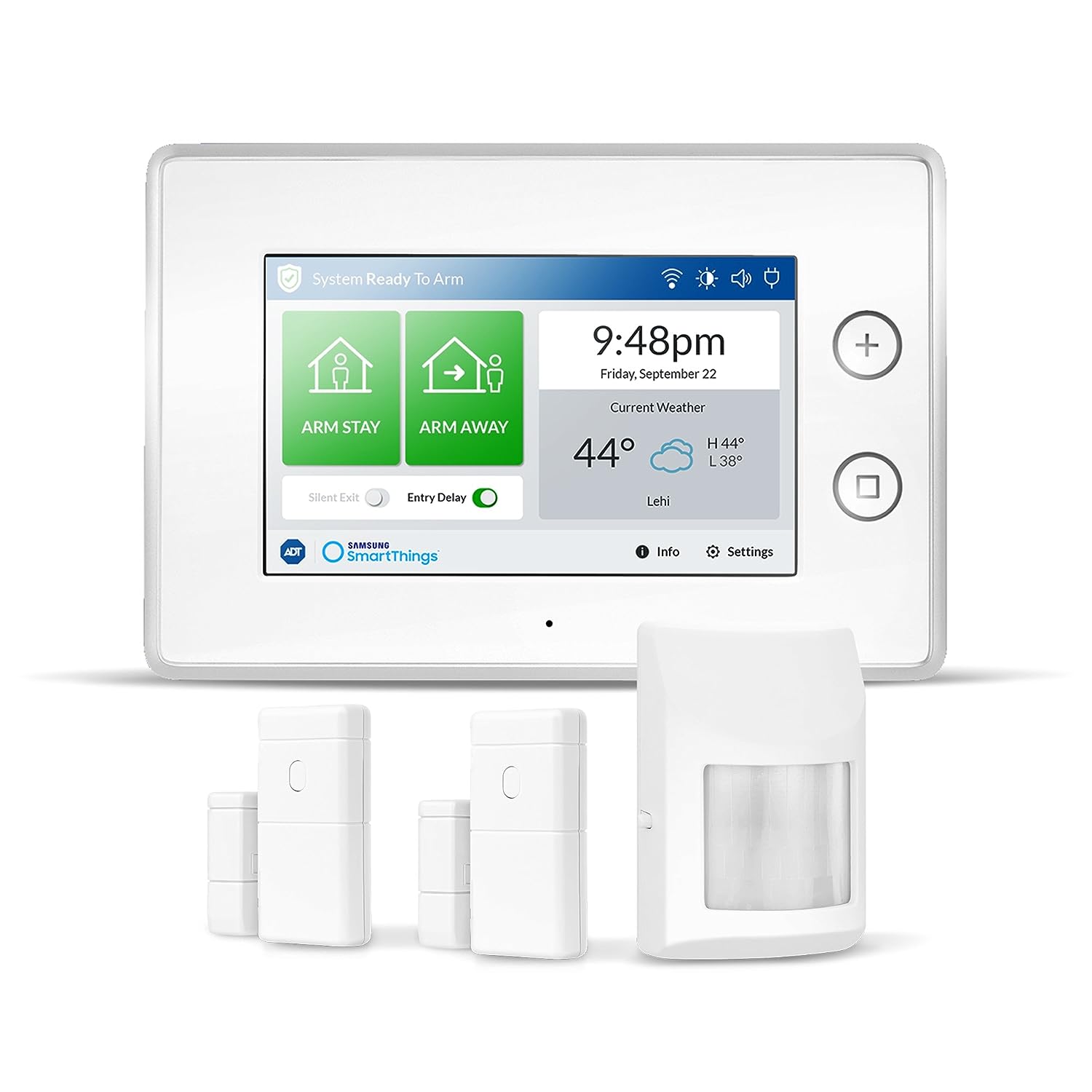 Awesome! What Else Does it Feature?! 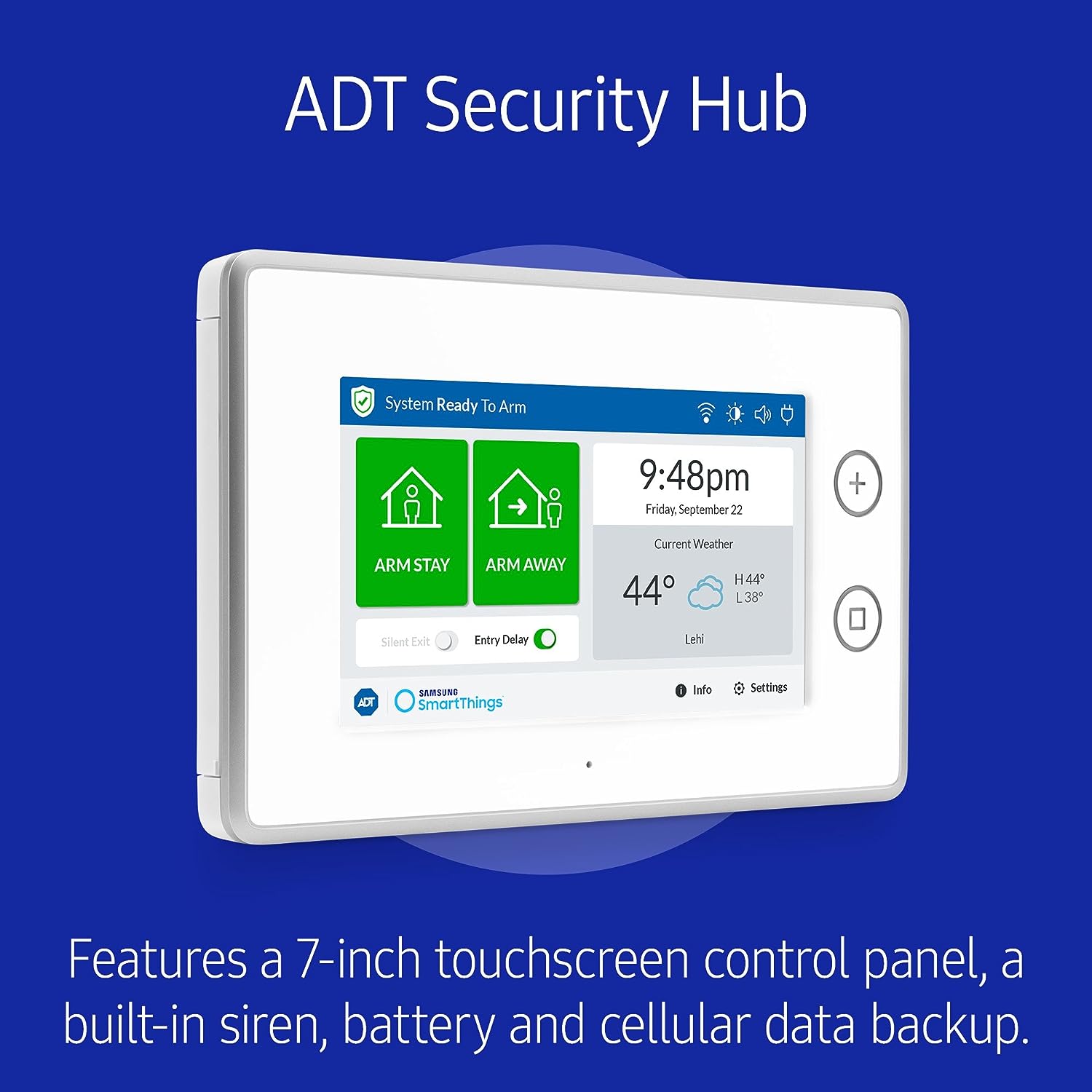 Well, it honestly depends on how deep you want to get into the Samsung SmartThings ADT Wireless Home Security Starter Kit. If you're not convinced yet, then you may need to keep reading. So, SmartThings has an API that you can log into and see the status of all your current products that are attached to your hub. You can see things like when they were last triggered, if they're currently connected, and even your home IP address! One HUGE thing that I feel is missing is the ability to reset your ADT hub. I understand it to a degree, but not having any option to reset is crazy. I know what you're probably thinking, "Well, couldn't an intruder simply RESTART your hub and get back to robbing you?" True! But ADT could set it up like when you disarm your alarm. You need a code to disarm and could require a code to restart as well. It seems like an oversight, but luckily you can start when you get logged into their API and can access your hub online. Unfortunately, I'm not going to get into a step by step on how to do that during this review, but maybe I'll write an article another time about how to do it.

There are also "SmartApps" you can install within the Samsung SmartThings or original SmartThings app as well (wow, that's a confusing sentence!). Some SmartApps are simple and will notify you when a trigger is set off, so it's pretty important you take a look at them. I always want to know if the motion detector picks up movement, although it's typically one of my dogs or cats. I always want to know when a door is opened too, although it's typically me or my wife. I'll take 10,000 alerts that are "useless" (aka me opening a door) just so I know FOR SURE when that one unexpected alert comes through, I can act on it immediately. I would highly advise you peek through the SmartApps when you can!


Do I HAVE to Mount it on my WALL?

No! That's one of the great features of this alarm. If you don't want it on the wall, it comes with a stand that you can sit the hub in and have it sit like a photo frame. Obviously it doesn't look like one, but it's semi-close. It DOES have to be constantly plugged in though so make sure it's near a socket. There are easy to mount holes on the back of the unit if you do decide you want to put it on your wall. I placed mine about five feet above a socket and ran the cord down a small cable channel into the top of a secured socket box. There is an included zip tie that you can zip it into the socket, but I took it an extra step. Some home insurance policies do offer a discount if you install a secured/permanent alarm system, but you would have to check into your own to be sure. In fact, I ordered this Safety Innovations Twin Door Babyproof Outlet Cover Box for Babyproofing Outlets, drilled a small hole in each door and zip-tied the door shut. You could potentially put a lock on it as well, which would force any intruders to have to destroy the box in a feeble attempt to unplug the device, but since it has a battery backup it wouldn't do anything anyways. It's just another way to waste a potential burglar's time.

I imagine if it wasn't wall-mounted (or even if it is), a potential burglar could attempt to throw the unit outside. Unless you're in a pretty busy area, this attempt could confuse any passerby's since they wouldn't know where the unit belongs. Regardless, the unit looks great on the wall or on the stand. Hopefully, you don't let this keep you from buying the unit if you're interested.

Do You Like SECRETS? This SMART HUB has Some!

Good! Cause I have one for you! If you do decide to pick up the Samsung SmartThings ADT Wireless Home Security Starter Kit with DIY Smart Alarm System Hub, Door and Window Sensors, and Motion Detector, then there are even MORE settings than you thought! Let me explain! So once you get your hub completely setup and you're ready to start diving into the more advanced stuff, there an "out of the way" menu that allows you to change some of the "hardcoded" features. If you long-press the Samsung SmartThings logo in the bottom left-hand corner, it will prompt you for a password. Don't put your password in — cause it won't work! Instead, enter "1501" and you will be promoted with the menu you see to the side.

Now that you're in, there are tests you can do for the motion detector, more wireless settings/information and system configuration stuff that allows you to change how long to wait before your system becomes armed. For instance, when you arm your security panel, it gives you a window to get out the door that I believe it a minute and thirty seconds. When you open the door the first time, the timer resets. After that, you have to make sure it's locked and ready to go or your alarm will sound. You have the option (NOW) to change that timer, down to a minimum of 45 seconds (I believe). There are plenty of things to do here that I'll probably touch on in a further article, but for now, I think you should know it's there!

I really believe this panel was meant for bigger things that it has accomplished and feels almost abandoned in its current state. I almost feel like there were TWO really bigs names that came together in this (Samsung and ADT), but I just don't know what happened. Maybe one side thought the other would do all the work? I'm not sure, but even with that said, I would highly recommend the Samsung SmartThings ADT Wireless Home Security Starter Kit. I would rate it a solid 8.5/10, only removing some points for the hidden settings (they don't need to be hidden), the lack of an EASY way to restart the hub and the occasional "hiccups" in the sounds it does make (almost like a poor connection).

But it does it's job. It keeps my house safe by helping me keep people out. I have sensors on several doors and windows and I haven't had one malfunction, break (on its own) or do anything remotely "weird." I also get nervous with magnets and their interactions with electronics, but these things just work — and that's great! With no REAL reasons to have to reset the panel, I don't want to hold the lack of a reset button against it too much, but it's just weird. Past that though, it's a fantastic product! If you're interested in reading more about it, I would greatly appreciate it if you checked it out through one of thelinks on my website or the button to the right.